Behringer Europower PMP500MP3
Behringer Europower PMP500MP3 500W 8-Channel Powered Mixer from Behringer features dual 250-watt amplifiers and an 8-channel mixer with a built-in MP3 player, reverb, and support for wireless microphones. The mixer is highly portable and may be used on a table top or mounted to a mic stand. The unit has four mic/line channels and two stereo line-level channels. Channels 1-4 feature dedicated reverb, while all channels includes a 2-band EQ. Additionally, the master bus offers a global contour button with music or speech settings. Channels 5-6 and 7-8 offer RCA inputs for portable music players, but Channels 7-8 also double as the MP3 channel with volume and EQ controls. 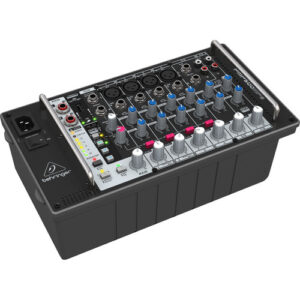