DSLR Microphone
The DSLR Microphoen Boya BY-SM80 Stereo Microphone is a stereo X/Y condenser microphone, which produces broadcast quality stereo sound to your DSLR camera, video camera or audio recorder. The BY-SM80 is equipped with a high signal-to-noise ratio and is highly sensitive, providing greater control of your audio than the internal microphones integrated into DSLR cameras, video cameras and digital recorders. Both microphones can be turned 90  120 allowing you to achieve the best possible sound.
A DSLR microphone, colloquially mic or mike (/?ma?k/), [1] is an acoustic-to-electric transducer or sensor that converts sound into an electrical signal. Electromagnetic transducers facilitate the conversion of acoustic signals into electrical signals.Microphones are used in many applications such as telephones, hearing aids, public address systems for concert halls and public events, motion picture production, live and recorded audio engineering, two-way radios, megaphones, radio and television broadcasting, and in computers for recording voice, speech recognition, VoIP, and for non-acoustic purposes such as ultrasonic checking or knock sensors.
Most microphones today use electromagnetic induction (dynamic microphones), capacitance change (condenser microphones) or piezoelectricity (piezoelectric microphones) to produce an electrical signal from air pressure variations. Microphones typically need to be connected to a preamplifier before the signal can be amplified with an audio power amplifier and a speaker or recorded.
Box Contains 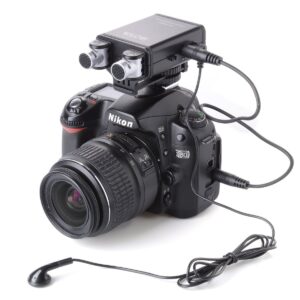