Well-rounded, lightweight, and sleek, the Panasonic S5 price in pakistan meshes capable video and photo capabilities with a portable body design. Featuring a full-frame 24.2MP CMOS sensor, the S5 is distinguished by its UHD 4K60 10-bit internal recording, Dual Native ISO, and wide 14+-stop dynamic range. Beyond video, it caters to a versatile range of stills applications with 7 fps continuous shooting, ISO 100-51200 native range, and even a 96MP High-Res Shot mode. Regardless if working with photo or video, the S5 maintains a quick and accurate 225-area DFD autofocus system with refined subject tracking, as well as 5-axis sensor-shift image stabilization to minimize the appearance of camera shake.

In terms of physical design, the S5 borrows elements from the larger S1-series of cameras but has a smaller footprint and lighter weight profile for improved portability. The S5 incorporated a 2.36m-dot OLED electronic viewfinder and a free-angle 3.0″ 1.84m-dot touchscreen LCD, and it has built-in Wi-Fi and Bluetooth for wireless connectivity. Dual SD memory card slots are featured, too, for flexible file storage and the body also has a splash- and dust-sealed design for working in trying conditions.

Featuring a full-frame 24.2MP CMOS sensor and an updated Venus Engine, the panasonic S5 balances high sensitivity, a wide dynamic range, and speed. The sensor-processor combination enables a useful ISO 100-51200 range, which can be expanded to ISO 50-204800, to suit working in a variety of lighting conditions. For working with fast-moving subjects, the S5 also enables full-res shooting at up to 7 fps with AF-S or 6 fps with AF-C, or up to an impressive 60 fps continuous shooting when using 6K or 4K PHOTO modes.

Optimizing your recording for post-production color adjustment, the S5 also features a pair of gamma settings suited to capturing a wide dynamic range. V-Log has been pre-installed on this camera and is used to capture a flat, neutral gamma curve and an equivalent 14+ stops of dynamic range, making it well-suited for grading. Additionally, a High Dynamic Range mode, and Hybrid Log Gamma, can be used to record greater detail in both the shadow and highlight regions of a scene. Additional picture styles are available to provide a more gradable image, such as Cinelike V2 and Cinelike D2, as well as an in-camera LUT to make monitoring easier. Additionally, recording to an optional external recorder is possible, via the HDMI Type D port, and support for an external microphone and headphones are also available via dedicated 3.5mm jacks.

For accelerated autofocus performance, the DFD (Depth-From-Defocus) technology quickly calculates the distance to subjects and adjusts the focusing position in as little as 0.08 seconds, with sensor and lens communication occurring at rates up to 480 fps. This contrast-detection type focus method benefits both still and video recording modes, as well as subject tracking applications, using Advanced AI Technology, where subject type, color, size, and motion vectors are used to intelligently lock-onto the moving subjects and ensure precise focus. When working with portrait subjects, face, eye, head, body, and animal detection capabilities make it easier to prioritize focusing on specific areas of the subject. The focusing sensitivity and speed can be adjusted to further improve performance with certain subjects. It also features 225 AF areas, which provide excellent control over where the camera will focus. Additionally, supporting working in low-light conditions, a Low Light AF feature enables accurate AF performance down to -6 EV.

Benefitting manual focus operation, focus peaking is available that highlights bright edges of contrast with a colored outline for quickly recognizing your focus point, as well as Touch MF Assist for touch-to-focus operation. Other AF features include an AF Point Scope setting that temporarily magnifies the subject by 3x to 10x for confirmation of the focus position and a custom selectable AF zone for Multi AF / Custom Multi AF.

Complementing the camera’s wireless connectivity, Lumix Sync is an iOS and Android app designed to pair with the camera for smartphone or tablet-based remote shooting control and wireless image transferring.

Other Camera Features of panasonic s5

For every kind of photographer, there's a Panasonic LUMIX camera to match. Point-and-shoots with pro-quality imaging and WiFi. Tough, all-season adventure cameras for action addicts who love to share. And LUMIX DSLMs for pro-photo performance with 4K cinematic video for serious hybrid photography fun.Panasonic camera prices in pakistan. Lumix is Panasonic's brand of digital cameras, ranging from pocket point-and-shoot models to digital SLRs. Compact digital cameras DMC-LC5[1] and DMC-F7[2] were the first products of the Lumix series, released in 2001. Most Lumix cameras use differing releases of the Panasonic Venus Engine for digital image processing; the original version (2002) was followed by II (2004), Plus (2005), III (2006), IV (2008), HD, V (2009) and VI, HD II, FHD (2010). Some Lumix models are branded with Leica lenses (e.g. Nocticron or Elmarit lenses), although Leica does not manufacture the lenses. Others are rebranded as Leica cameras with different cosmetic stylings. Panasonic showed a prototype of a planned 3D Lumix camera in September 2011,[3] saying that it would have twin 4x zoom lenses with folding optics and optical image stabilization for both video and still images.[3] Panasonic collaborated with Sigma and Leica to form the L-mount Alliance on 25 September 2018, and licence the L-mount system for their own lines of lenses and cameras.[4] in 2019 Panasonic announced the release of its new S-series line of mirrorless cameras. 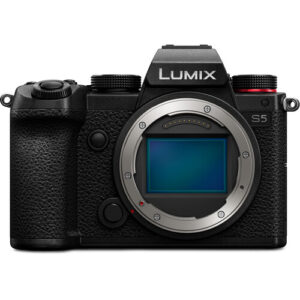