1/8? TRRS Port for Monitoring/Line Out

Chain up to Two iRig Mics to Same Device

Comes with Suite of Recording Apps

IK Multimedia IRIG MIC
The 2-pack IK Multimedia IRIG MIC for Smartphone/Tablets from IK Multimedia is an omnidirectional condenser lavalier microphone with a 30 Hz to 16 kHz frequency range that comes with a foam pop filter to eliminate vocal plosives, wind noises and other unwanted sound in applications for iPhone, iPad, iPod touch and Android mobile devices.
Capturing broadcast-quality audio in the field, the IK Multimedia IRIG MIC comes with on-board monitoring, and has a 1/8? TRRS port that can be used to output audio to your headphones. In addition, you can chain and record up to two iRig Mic Lavs on the same device using the dual-purpose 1/8? TRRS port. To monitor a dual iRig Mic Lav setup, you just need to set the switch on the second iRig Mic Lavs jack to monitor,  and then youll be able to plug in your headphones.
Furthermore, iRig Mic Lav is ready to record right out of the box. You get iRig Recorder Free, VocaLive, which is an effects processor and multi-track recording app, and EZ Voice for iPhone, iPad, iPod touch, and Android devices. EZ Voice allows you to practice and record over any song stored in your devices music library.

Finally, the iRig Mic Lav with the included audio capture apps is a suitable choice for interviews, to making podcasts, and everything in between. 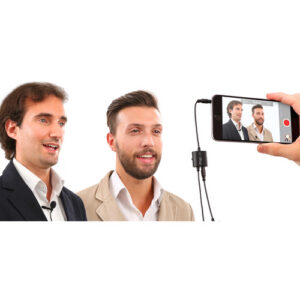