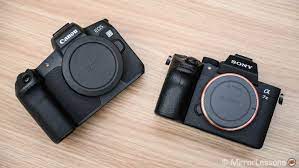 If you are thinking to buy or your decision is pending then do not worry, we have got some point in helping you choose between your next full-frame mirrorless camera in this critical review of Canon EOS R vs Sony A 7 III.

If you are looking for a reasonably priced mirrorless camera in the market then you may have noticed that the competition is really tough and close.

Canon EOS R and Sony a7III are not the latest touchscreen mirrorless cameras released but the fact is they are really powerful and created on most technical features.

Below you will find the crucial differences which will help you make your decision easier and faster.

Buying a mirrorless full-frame or any camera is interesting when you see the viewfinder for the first time. You are either let down or amazed.

The quality of the viewfinder in the Sony camera is not good enough and there doesn’t have the wow factor to make two thousand dollars cash to pay for it till you really evaluate whether it is the best buy and worth it.

Canon EOS R on the other hand will tickle your mind looking through the dreamlike viewfinder, especially if you are already seen what Sony has to offer and looking at it after that.

The Canon EOS R and the Sony A7 III both have to articulate rear LCD touch screens, but they have considerable differences between them.

If you already own a Sony mirrorless camera, you will probably find the Sony A7 III’s 3″ touch screen with 921,600 DPI better, and it seems fantastic till you see Canon’s rear LCD system.

Today even expert photographers shoot some videos to go along with their photos. Both cameras- Sony and Canon offer 4K video for the web but here also with some good differences.

Whereas Sony captures 4K video at 24p and 6K and downsamples to get with 5K resolution with a 1.2x crop to provide 4K video at 30p. Video resolution of Sony is professional levels and above Canon’s video results definitely.

Battery life is an important feature but you either care about it a lot, or you don’t care at all and tend to buy more batteries.

Canon EOS R full-frame camera uses the LP-E6N lithium-ion battery 1865mAh and is good for more than 300 shots per charge.

On the other hand, Sony A7 III operates 2280mAh which they rate as good for more than 700 shots in a single charge.

Hence, the Sony camera’s battery life is more than 22% bigger.

You get it or not but the fact is Canon doesn’t have image stabilization whereas Sony’s a7III has it.

Sony A7 III has the superiority of this feature over Canon because it has the feature of in-camera sensor-based optical stabilization of 5-axis.

Canon EOS R is around $200 which is cheaper than the Sony A7 III (Check price on our SHOP).

Both Canon and Sony have tough and close competitors. Many consider Sony the mirrorless full-frame company to beat Canon, but it also offers a wider lenses selection.