Photography Tip: The difference between fixed and variable aperture 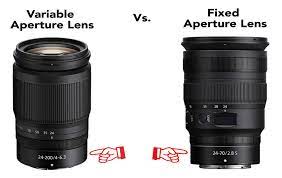 Variable aperture comes into play if you have a zoom lens. If your lens has two numbers, i.e., F/3.5 to F/5.6, you have what’s called a variable aperture lens. This means your widest aperture (lower number) is different at different focal lengths.

The variable aperture allows the camera manufacturer to make the lens for less money. These lenses are often smaller and lighter than their fixed aperture counterparts.

Should you buy fixed or variable aperture glass? It depends on how serious you are about your photography, what your goals are and how skilled you are.

Most beginners, casual amateurs and snap shooters will never need the fixed aperture zooms. And all zooms made within the last five years are significantly better than the zoom lenses (even the expensive ones) I used in the 70s and early 80s.

Lenses with variable apertures mean that the aperture changes based on your focal length. On my 18-55mm lens, I could achieve a f/3.5 aperture when zoomed all the way out to 18mm. When I zoomed in to 55mm, the widest aperture available was f/5.6.

These lenses are typically lighter and are great travel options. They’re also great because they’re much more cost-effective.

The downside here is the limitation of aperture choices, which affects not only depth-of-field but the range of exposure choices as well. If I’m photographing an event with a variable aperture lens, it means that each time I zoom to bring the subject closer, I lose light, because the front element of my lens’ isn’t big enough to let in more light. If I photograph an event outside this gets even more challenging, especially with clouds changing the light source on a constant basis. Long story short, it can be more difficult to control your exposure with a variable aperture lens.

Outside of exposure, variable aperture lenses allow camera manufacturers to produce lenses for a lot less money. They pass these savings on to the consumer, resulting in a lower-priced, and quite often an inferior quality lens.

The opposite is true of fixed aperture lenses. These lenses are heavier in comparison to their variable aperture brethren. These lenses come with some serious glass and mechanics packed inside. Of course, this leads to higher-priced lenses, but the benefits are manyfold.

With a fixed aperture lens, the aperture functions independently from the focal length of the lens. Meaning, whether you’re zooming in or not, your aperture stays constant until you adjust it either within your camera. Remember that event I was photographing? I can photograph someone right next to me, or 50 feet away, and get the same exposure levels. My aperture won’t change automatically when the focal length increases to bring the subject closer — instead, I’ll have complete control over it, no matter if it’s set at a wider angle or full telephoto.

If you’re talking mechanics and technology, fixed focal length lenses will provide a sharper photograph. But they’re much more expensive. They are heavier, making them more difficult to travel with or carry around for long periods of time.

There’s no globally best option here — it’s really what’s best for your situation. If you photograph in a lot of dark environments, being able to open your aperture to f/2.8 or better is most definitely a benefit. That fixed aperture will come in handy. Likewise, if you’re trying to narrow down your travel kit to one body and one or two lenses, a variable aperture lens might give you an option that can let you capture a wide array of situations. Remember, most kit lenses are cost and quality cutters. There are good variable aperture alternatives even though they do cost more.