Mavic 2 Pro vs Mavic 2 Zoom: Which One Should You Opt for? 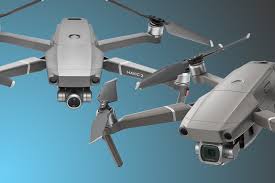 DJI’s Mavic series is the most reputed brand in the drone camera market, and it has four models – Mavic Air 2 and Mavic Mini, and two other versions of the Mavic 2: Mavic 2 Zoom and Mavic 2 Pro. If you need the best features you will gravitate to the Mavic 2 of the first two models, but then you need to decide between these two.

If you are getting started in drone cameras, it would be easire to learn with the Mavic 2, but you might get enough of what you need with the much afforable rates in Mavic Mini. If you are especially want to get into fast action, the mid-tier but latest Mavic Air 2 can output 4K at 60fps but it does not offer the same featureof automated collision sensors or flight modes.

The Mavic 2 quadcopter series also facing strong competition from the Autel EVO II which, like the Mavic 2, is available in Pro configurations but is even bigger and some features are missing.

There is not a lot of comparsion between the two as both drones use the same airframe, but this is important to point out how good it is. The Mavic 2 is a reinforced version of the original Mavic Pro

It is not surprising that two near-identical drones have matching performance; the 2 gms weight differential do not have any much effect on the key features of performance. Both, can fly at upto 6,000m altitude.

We are observing at the same battery timings and the same airframe, and only 2 more gms on the Pro. They have good batteries, with built-in circuits to calculate remaining power and reduce the fire risk. Depending on whether you can have your Mavic 2 alone or with the Fly More kit, you will get one or 3 of these batteries, and with the kit a ‘Charging Hub’ which allows you to sequentially charge batteries with them without you having to be there to swap the batteries again. If you are traveling, then this is a must to have accessory as you will likely needt to do all your charging while you yourself recharge!

The Mavic 2 controller – same for both, of course, takes advantage of the DJI Go 4 App and your smart phone to give live feedback, with video visiblility at up to 10 km. This radio technology is found in the latest Mavic Air 2, and is a distinguished improvements over may other drones we had, but the implementation and execution on the Mavic 2 series works even further than the Mavic Air 2, being compatible with DJI’s goggles to give an on-site client a real first person view.

This is where things are marked differently; these does not have the same cameras at all (Although they do both seem to handle same data – the 12 megapixels Zoom’s burst mode can handle 7 shots while the 20 megapixels Pro caps out at 5). Where the components matter, though, the Pro has the upper hand: 100 – 12,800 ISO beats 100 – 3,200 on the Zoom.

It is difficult hard to argue Mavic 2 Zoom has the better camera drone, but for moviemakers the ability to operate a real telephoto lens might bring some great benefits. You can achieve some different alternatives if your drone is tracking from different distances, so a zoom is very appealing for filmmakers also

Splitting the DJI Mavic 2 into different models makes the choice difficult, so the foremost point is that you would not really be going wrong with either. They  both are well-equipped drones aircraft with excellent range and good battery life.

For those peoplewho think most about photographs – the Mavic 2 Pro seems worth the extra penny for them. Similarly, if you are shooting for high-end distribution content, and you find that editors insist on a file of 10-bit video, then you will have no choice but to opt the Pro and work in either 28mm or 40mm equivalent focal length when capturing video.

Shop with us to experience more or contact us.