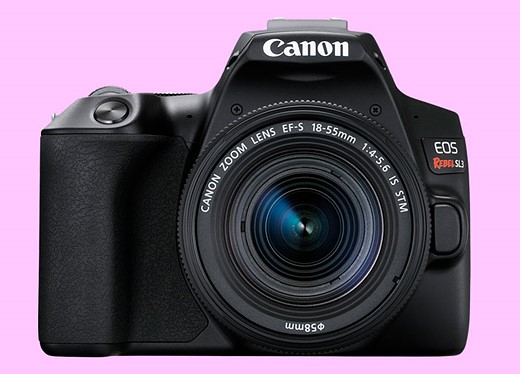 Canon are still the leading camera brand in 2021, despite some fierce competition from the likes of Sony and Nikon.

Canon have recently been concentrating most of their efforts on full-frame mirrorless interchangeable lens cameras, quickly developing a superb range of of bodies and lenses to rival the best that their rivals have to offer.

Here’s our list of the best Canon cameras that you can buy in 2021:

Canon were a little late to the mirrorless party, only releasing their first full-frame model in 2018, but they’ve certainly been making up for lost time in recent years with the release of a slew of new cameras and lenses.

Chief among these is the EOS R5, a 45 megapixel camera that can shoot at 20 frames per second and can also record 8K video.

If the R5 is too expensive, there are three other excellent options available, the EOS R6, EOS R and EOS RP (in descending price order).

Canon also has a range of APS-C sensor mirrorless cameras, the EOS M series, which has received a little less love in terms of development but is still worth considering if you can’t stretch the budget to a full-frame model.

Just when most people assumed that DSLRs were going to die a slow death, Canon decided to prove otherwise. The EOS 90D is the first camera of its kind to boast a 32.5MP sensor and, alongside a Digic 8 processor, gives the snapper the ability to capture 4K video at up to 30fps which, thankfully is uncropped. While it’s the same sensor and image engine pairing as the EOS M6 Mark II mentioned above, the EOS 90D doesn’t quite have the speed of its mirrorless cousin, instead of topping out 11fps when shooting continuously in live view mode.

There’s a new metering sensor under the hood as well and its performance is excellent, exposing areas of light and shadow to near-perfection. However, we did find that due to the high pixel density on the crop sensor, noise performance isn’t the best but for the most part that can be taken care of during post-production.

Digital SLRs have been Canon’s best-selling cameras for many years now, and even with the recent advent of mirrorless, they still make up a large part of the company’s overall sales. Indeed, Canon are still the number one player in the DSLR market.

Consequently they offer a vast range of different models, from the Olympics-level EOS-1D X Mark III right down to the beginner-focused EOS 2000D camera.

If you want an interchangeable lens camera and prefer an optical viewfinder to an electronic one, Canon literally have a DSLR for every budget.

For in-depth knowledge or more information of Canon DSLR or Canon camera price in Pakistan, please contact our experts