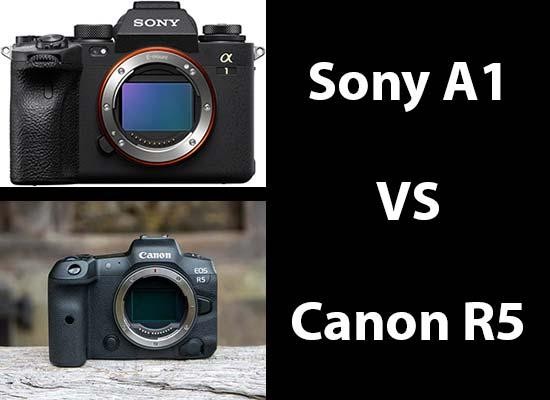 Canon has enjoyed a lot of success recently with the EOS R5 camera, topping last years best-selling charts in Japan and being one of the main drivers behind Canon’s profitable 2020.

Now Sony have struck back with the secretive launch of the Alpha 1, easily their most impressive camera to date, which is clearly a direct challenger to the EOS R5.

The Sony A1 price in Pakistan and the much cheaper Canon R5 price actually share quite a lot of similarities, though, when it comes to their core specifications and features, so which one should you pick?

We’re bringing you this in-depth Sony A1 vs Canon R5 head-to-head comparison to help you choose between these two flagship full-frame mirrorless cameras.

It’s business as usual in the Sony and Canon design labs. The Sony A1 and Canon EOS R5 have fairly similar dimensions, but the A1’s main body box is trimmer and more angular than the R5’s.

Canon lets its contours bloom out, for a softer appearance and shape. Thickness is the one significant practical difference here. The Sony Alpha 1 is around 17mm slimmer than the Canon.

But when you compare these cameras from above, much of the difference is down to the jutting of the EVF eyepiece and the shape of the handgrip.

The Canon EOS R5’s grip extends out a little further, and perhaps has better contouring for your fingers.

Both cameras are weather-sealed, and there’s only a gram between them once you add the battery and memory card. The Canon EOS R5 weighs 738g, the Sony Alpha A1 737g.

Its display folds out on a hinge, where the Sony Alpha A1 has a less flexible flip-out display. Sony’s style will be quicker to use in some situations (particularly photography, rather than video), but the Canon’s is a good deal more flexible.

The most important differences here are the Canon’s greater screen size, and that more versatile hinge.

The situation flips around in the EVF, the electronic viewfinder. Sony’s EVF is significantly better. The Alpha A1 has a 0.64-inch OLED panel with 0.9x magnification, zero image blackout while shooting, and an excellent maximum 240Hz refresh rate.

The A1’s EVF resolution is 9.44-million dots, equivalent to 2048 × 1536 pixels. This is a fantastic, large, very high resolution viewfinder.

It’s not quite the difference between a Full HD TV and a 4K one, but there is a significant gap here.

Back when full-frame cameras had to rely on separate AF modules, the number of focus zones was a reasonable indication of AF performance. Nowadays? Not so much.

By comparison, the Sony A1 has a more traditional-sounding 759 focus zones. Either way you look at it, Canon’s numbers are higher.

Frame coverage is perhaps more important. The Canon covers 100% of the frame, the Sony ‘just’ 93%. Of course, this isn’t going to affect too many people as we’re talking about the extreme edges of the frame here.

Action photographers, take note. The Canon EOS R5 can shoot at up to 20fps using its electronic shutter, or 12fps using its mechanical one.

It’s fast but the Sony A1 is faster, at least in its electronic shutter mode. Its Bionz XR processor allow for 30fps capture of 50MP files. There are also 20fps, 15fps and 5fps modes if you don’t need that max speed.

It’s time to tackle some of the slightly dry, but important, practicalities of these two cameras. The Sony A1 uses the NP-FZ100 battery, a 16.4Wh unit. The Canon EOS R5’s LP-E6NH battery has slightly lower capacity of 15.3Wh.

Sure enough, the published Sony figures are a little better than Canon’s. The Alpha 1 is rated for 530 shots using the LCD screen, or 430 shots with the viewfinder. This drops to 490 shots (LCD) and 320 (viewfinder) in the EOS R5.

Canon does not publish any video stamina figures, but Sony does. It claims the A1 offers 145 minutes of continuous recording with the viewfinder, or 150 minutes using the LCD display. There’s no word on the video mode used for these tests, but it’s not going to be 8K.

Both cameras have dual memory card slots, but the types they accept are different.

The new Sony Alpha 1 seems to have the clear edge over the Canon EOS R5 in many ways, most notably 8K video, the stacked 50mp BSI sensor, faster burst shooting, and the class-leading LCD viewfinder – but it’s not all a one-way street, with the R5 offering a great AF system, better handling, more effective IBIS system, and a more versatile LCD screen.

Obviously, the price tag is literally a big difference between the two – do the extra features and, on paper at least, better performance justify the substantial hike in price for the Alpha 1?

So what do you think? Would you choose the new Sony A1 or the Canon R5, and why? Leave a comment below!