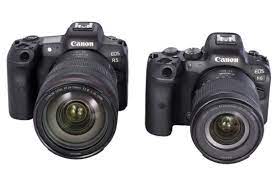 Canon R5 and R6 are all getting firmware updates—Canon software will also receive updates.

Canon announced the immediate release of firmware updates of its high-end cameras, adding several features that users have been asking for.  Two of Canon’s most recent releases, the EOS R5 and R6 cameras, will be getting firmware updates v1.3 and v1.3, respectively—the firmware updates are not identical. Both cameras, which were released over this past summer, are part of Canon’s high-end line of full-frame mirrorless cameras.

The Canon EOS R5 will benefit from a number of upgrades including Full HD 120p and support for greater customization of the camera. Users will now able to save personalized and preferred camera settings to a memory card, which can be copied across to a different camera or used when settings are adjusted. There is also the option to turn the LCD monitor off during shooting and use it for playback only, providing a familiar DSLR-style operation. For both the EOS R5 and Canon EOS R6, the firmware achieves full-time manual support for RF lenses, allowing photographers to override the focus of RF lenses manually when in Servo AF mode.

For the EOS R5, professional photographers can safeguard and quickly share photos with the new Protect Image Transfer function allowing protected images to be locked – preventing them from accidentally being deleted – and transferred via FTP. Across the EOS R5, professionals can now see FTP Transfer status on the display clearly showing how long it will take to transfer pictures.

Following the release of the R5 and R6 cameras last year, it quickly became clear that both cameras suffered from an overheating issue when recording high-resolution video. Firmware updates were quickly released to address the overheating issue on both mirrorless cameras, but the controversy surrounding their initial release has cast some doubt on the camera manufacturer.

The firmware updates are all available right now, as well as the software updates to several different Canon software. The EOS Utility software is receiving update v3.13.1. Canon is providing support for devices using Apple M1 processors. Rosetta for Digital Photo Professional is getting update v4.14.

You can take a look at Best Canon camera in Pakistan also for more. For guidance or buying at affordable price cameras please contact Golden Camera – Best camera shop in Karachi.

Are you excited about these updates? Tell us why, in the Comments section below!